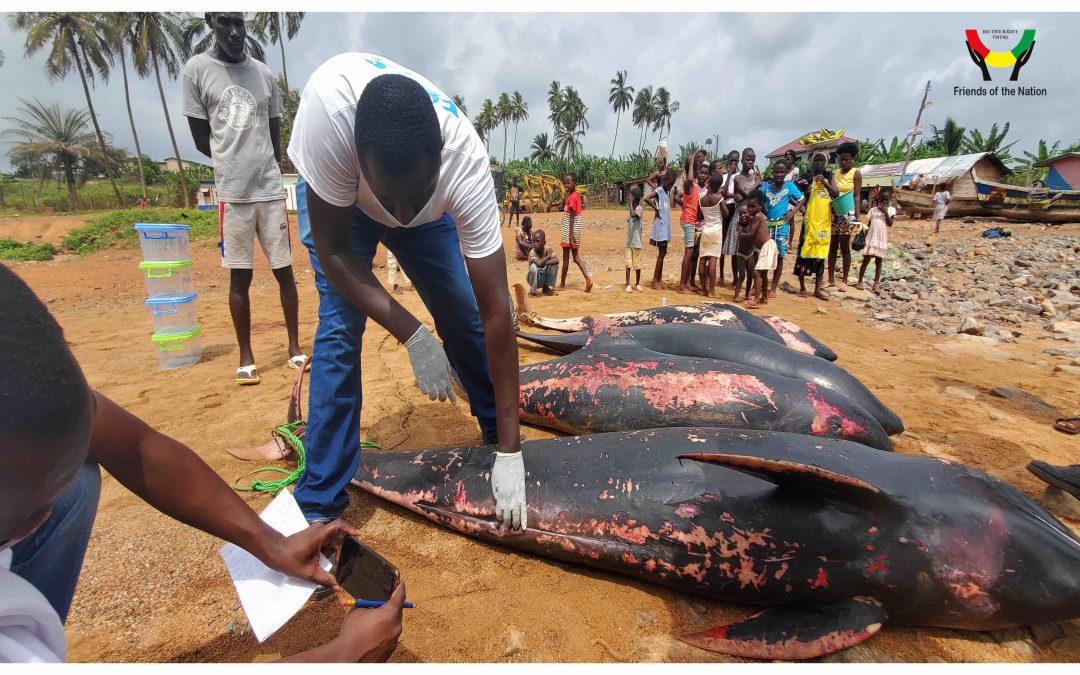 As Ghana joins the international community to celebrate this years’ World Fisheries Day, Friends of the Nation and Centre for Coastal Management of the University of Cape Coast with support from the Oceans Associated Incorporated (OAI) and the National Oceanic Atmospheric Administration (NOAA) calls on the Ministry of Fisheries and Aquaculture Development (MoFAD) to expedite action to reduce the high incidence of cetacean bycatch as envisaged in the yet to be gazetted 2020-2026 Marine Fisheries Management Plan.

Marine mammals, scientifically referred to as cetaceans play a key role in helping to combat climate by contributing to the circulation of nutrients within the water column and the transfer of nutrients between waters of different latitudes. Of greater importance is the role cetaceans play in sequestering an estimated 33 tons of CO2 on average from the atmosphere, both directly and indirectly.

Further, their faeces are particularly rich in iron and nitrogen, both of which are necessary for the development of phytoplankton. This phytoplankton is responsible for generating 50% of the oxygen we breathe, as well as capturing around 37 billion metric tons of CO2, an estimated 40% of all CO2 produced (an amount that according to the International Monetary Fund (IMF) would be equivalent to 1.70 trillion trees or 4 forests like the Amazon).

Additionally, cetaceans are at the top of the food chain and have an important role in the overall health of the marine ecosystem by protecting small pelagics from being preyed upon by sharks.

However, the conservation of cetaceans has been an issue of global concern as increased exploitation of cetaceans has led to significant decline of cetacean populations in many coastal marine waters around the world. Experts estimate that a minimum of 300,000 whales and dolphins are killed each year because of fisheries bycatch, while others succumb to a myriad of threats including shipping and habitat loss.

In Ghana, there has been an increasing trend in the ‘directed catch’ of cetaceans as “marine bushmeat”, in the face of the country’s near-collapse marine fisheries in recent times. Unfortunately, data availability on cetacean landings has remained scanty for decades, and available data are usually limited in geographical scope and time.
There exist obvious shortfalls in the data collection, monitoring and reporting of marine mammal bycatch, and very little progress has been made to address the increasing trend in directed catch of these cetaceans.

Ongoing observations by scientists from the University of Cape Coast and the Friends of the Nation reveal that the landing of cetaceans as bycatch is still pervasive in three coastal regions of the country despite the efforts of the Fisheries Commission and the Enforcement agencies to curtail the practice.

It is in the light these observations that Friends of the Nation and the Centre for Coastal Management of the University of Cape Coast makes the call on MoFAD and all fisheries associations to take immediate action to reduce the incidence of cetacean bycatch to ensure effective conservation of these important marine mammals.