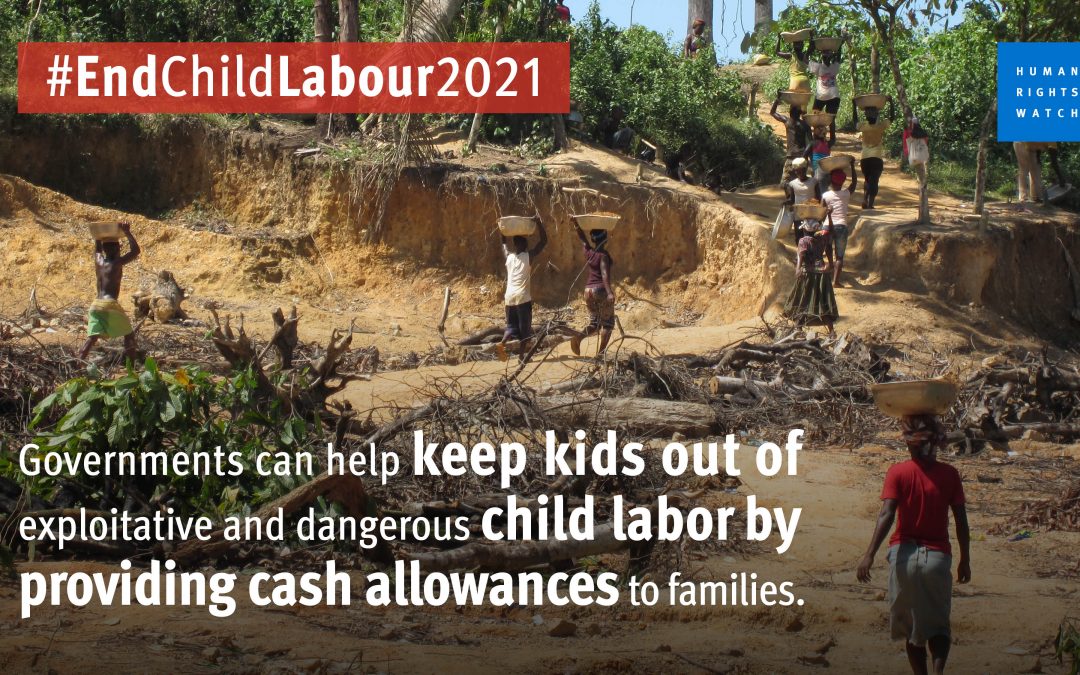 (Takoradi, May 26, 2021) – The unprecedented economic impact of the Covid-19 pandemic, together with global school closures and inadequate government assistance, is pushing children into exploitative and dangerous child labor, Human Rights Watch and Friends of the Nation said today in a report released ahead of the World Day against Child Labor on June 12, 2021. The Ghanaian government and donors should prioritize cash allowances to families to protect children’s rights and enable families to maintain an adequate standard of living without resorting to child labor.

The 69-page report, “I Must Work to Eat”: Covid-19, Poverty, and Child labor in Ghana, Nepal, and Uganda,” was co-published with Friends of the Nation in Ghana and Initiative for Social and Economic Rights (ISER) in Uganda. It examines the rise in child labor and poverty during the Covid-19 pandemic, and the pandemic’s impact on children’s rights. Children described working long, grueling hours for little pay after their parents lost jobs or income due to the Covid-19 pandemic and associated lockdowns. Many described hazardous working conditions.

“The pandemic has hit Ghanaian families hard, forcing many children into exploitative work,” said Solomon Kusi Ampofo, program coordinator for Friends of the Nation. “The government should increase cash assistance to families to prevent further increases in poverty and child labor.”

Researchers interviewed 81 working children, some as young as 8, in Ghana, Nepal, and Uganda. In Ghana, Friends of the Nation interviewed 24 children ages 11 to 17 who worked at gold mines, in carpentry, fishing, by transporting goods, and selling items on the street.

Nearly all of the Ghanaian children interviewed said that the pandemic has negatively affected their family income. Many entered the workforce for the first time to support their families. Some said they decided to work because their families didn’t have enough food. A 16-year-old Ghanaian boy told Friends of the Nation that his mother, a trader, no longer made enough money to support him and his siblings. “I went to work to at least care for myself,” he said.

Some Ghanaian children described work that was clearly hazardous. Fifteen of the children interviewed worked in gold mining, which the government of Ghana has identified as one of the worst forms of child labor. The children said they carried heavy loads, crushed ore with hammers, inhaled dust from processing machines, and handled mercury, a toxic chemical that can cause irreversible brain damage. One 16-year-old boy reported handling explosives to blast the ore. Children working in other jobs also described exhaustion and carrying heavy loads.

Many described long working hours, particularly during school closures and lockdowns. In Ghana, one-third of the children interviewed worked at least ten hours a day, some seven days a week.

Many were paid very little. A 12-year-old boy said that he worked 11 hours a day carting fish to market but was paid only 2-3 cedis per day (US$0.34-0.52). “On many days, I go very hungry,” he told Friends of the Nation. Some children reported that their customers delayed paying them or refused to pay them.

School closures worldwide have also contributed to an increase in child labor. In Ghana, nationwide school closures began on March 16, 2020, affecting more than 9 million students. Although the government has provided distance learning programs, children without access to televisions, mobile devices, and internet have had little benefit. “I was idle at home after schools closed down,” a 15-year-old boy said. “So I decided to work to reduce the burden on my mum.”

Although most of the Ghanaian children interviewed returned to school after schools reopened in January 2021, some reported that their education suffered because of continued work demands. “I do not attend regularly, because I must work to eat,” the 12-year-old boy said.

The researchers focused on Ghana, Nepal, and Uganda because they have made significant progress in reducing poverty and child labor, and as “pathfinder” countries, have committed to accelerate efforts to eradicate child labor by 2025 in line with the United Nations Sustainable Development Goals. However, each has lagged behind their regional peers in using cash allowances to address the Covid-19 crisis, spending less than neighboring countries and covering a smaller proportion of households with children.

Leading up to the pandemic, cash allowances to families with children contributed to a significant decrease in child labor globally. According to the International Labor Organization, the number of children in child labor decreased by approximately 94 million between 2000 and 2016, a drop of 38 percent.

In 2008, Ghana initiated a cash transfer program called LEAP (Livelihood Empowerment Against Poverty), but in 2020, the program reached only 5 percent of the country’s population. Prior to the Covid-19 pandemic, Ghana spent less than half of the regional average for Sub-Saharan Africa on social safety net programs, including cash transfers. Its pandemic response has also lagged behind its regional peers. Mali scaled up its cash transfer coverage by 591 percent, and Kenya by 800 percent, while Ghana expanded the number of cash transfer beneficiaries by only 5 percent.

“For many families with children, government assistance has been far too little to help them meet their basic needs,” said Jo Becker, children’s rights advocacy director at Human Rights Watch. “Ghana and its donors should scale up cash allowances to families to help keep children out of exploitative and dangerous child labor and support their return to school.” Download the report