Friends of the Nation in partnership with the Shama District Assembly on Thursday assembled officers of the Shama District Assembly who are at the front line to respond to emergencies in the district to review its emergency preparedness protocols. The meeting, sponsored by Oxfam Ghana under its COVID-19 emergency response program, and implemented by FoN brought together officers of the National Disaster Management Organization (NADMO), Ghana National Fire Service, Assembly members and other technocrats of the assembly to ensure that the assembly’s emergency preparedness plan is in sync with the updated national emergency response plan. 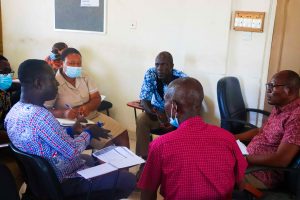 Some disasters identified to have been wreaking havoc in the district were listed as floods, which usually occurs at Inchaban, Ituma, Nyankrom, Shama Junction, Amissahkrom, Daboase Junction, Krobo, Bosomdo and Fawomanye. Figures from the NADMO in the district indicate that in 2016, some 659 persons from eight communities were displaced by floods at an estimated cost of Gh35900.

The remaining are fire outbreaks, structural failure, disease epidemics, sand winning/clay mining, and river/marine accident were among others disasters the district have had to deal with.

The Programs Coordinator at FoN, Mr Solomon Kusi Ampofo took the district emergency team members through activities the assembly must put in place before any of the identified disasters strike in the district, in line with the updated national emergency response plan.

The district NADMO Coordinator Mr. Michael Nyan on the other hand enumerated some of the challenges confronting their emergency preparedness in the district as the inadequate emergency relief items, the absence of the District Disaster Management Committee, the lack of official vehicle for emergency response and routine works and the ineffective stakeholders’ engagement and participation in disaster management among others. The meeting also solicited from participants, how these identified challenges could be mitigated to position the district in readiness for disasters. 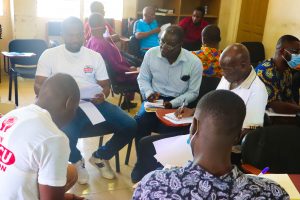 Mr. Solomon Ampofo in conclusion advised the assembly to be guided by the Shoreline Management and Flood Mitigation Plans the FoN facilitated for their adoption in the past, stressing that it is still relevant in disaster prevention.