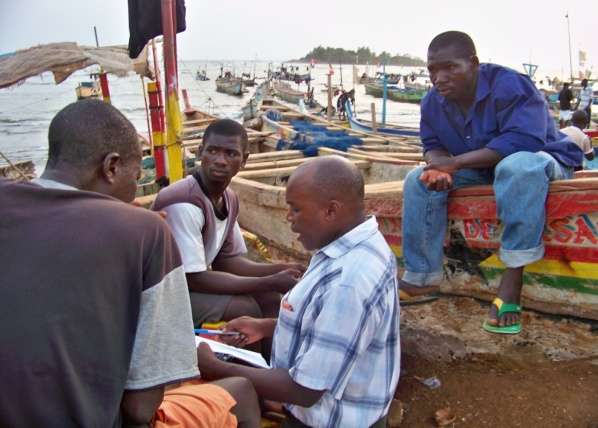 The Mwananchi Ghana project now comes to end. Friends of the Nation was part of the Mwananchi Ghana’s Grant Partners (MGP) who have used innovative communication strategies to enable citizen participation. With support from the Mwananchi-Ghana Project, FoN sustained the momentum that has been built starting 2002 in the fisheries sector to bring and keep grassroots fisherfolk dialoguing with other stakeholders culminating recognition of traditional and local fisheries regulations hitherto enforced by the chief fishermen and his elders as a means of contributing to sustainable fisheries, livelihoods, environmental sustainability and food security in the communities.
The local governance bodies (District Assemblies) pay little attention to the fishing industry in Ghana despite its importance to the local economy. Not only are the fisheries regulations not enforced rigorously, but also there is little transparency in how the Fisheries Development Fund is utilized by the Government. A law (LI 1986) which bans some fishing methods (e. g. light, chemicals, small-sized mesh nets) was passed in June 2010 to address some of the threats to fishing. The L.I. is good for sustainability in fishing, but in the short term it has adversely affected the operations of local fishermen, who constitute only a small part of the group of people using unsustainable fishing methods: The major problem for the fishing environment are the pair trawlers and foreigner-manned fishing vessels who continue to disregard fishing regulations and get away with it.
To address these problems FoN used a well-targeted information, education and communication (IEC) strategy to avoid conflict and to facilitate the adoption of the desired knowledge, behavioural change, attitude and practices required for a sustainable exploitation of fisheries resources. The strategy included meetings, durbars, workshops, drama productions and media programmes on governance issues in the fisheries sector. Opportunities for dialogue among key stakeholders were created to encourage more transparency on the management of the fisheries sector, including the utilization of the Fisheries Development Fund.
The Mwananchi Programme, with an objective for citizens to engage, facilitates learning on how civil society, media, elected representatives, and traditional leaders can enhance ordinary citizens’ ability to hold their governments accountable, and improve essential public services delivery (such as health and education) in six different African countries, including Ghana. It focussed on enhancing the voices and influence of “mwananchis” – the ordinary citizens – including poor and disempowered groups such as disabled people, young people and women”.

Building on the gains had from engaging fishing communities in 2007-2009 through the Rights and Voice Initiative (RAVI) project in eleven coastal fishing communities in the four coastal regions of Ghana, the Improved Decentralised Fisheries Project under Mwananchi Ghana was designed to further enhance the voices of fisherfolks and create enabling environments for them to exercise their such at the local government level.
Implemented in the Shama District and the Sekondi-Takoradi Metropolitan Area (STMA), the project advocated for fisherfolks inclusion in decision-making as the activity contributed significantly to local coastal economies. Though an exclusive sub-committee responsible for fisheries could not be attained within the project life-span of 21/2 years, a sub-committee charged with the responsibility of fisheries recognize fisheries‘ contributions and allowed them participation and involvement in decision-making processes of the Assemblies‘ legislative activities. The sub-committee had its members‘ capacity developed on the Fisheries Act 625, Fisheries LI 1968 and relevant portions of Local Government Act 462.
By these efforts, sub-committee together with fisherfolks were able to draft fisheries bye-laws for the consideration and adoption of the Assembly.
In an attempt to scale up fishery sector issues, the project in the run-up to Election 2012, brought together all aspiring parliamentary candidates in three constituencies of the project area in a healthy electoral debate at which they stated their positions on what they will be doing in the areas of fisheries, coastal and oil-and-gas management if given the mandate. FoN intends to support them with facts and figures from the grassroots in their work in far away capital city of Accra, and also continue to provide regular interface between them and the local fisherfolks for dialogue. By this exposition, fishery sector issues will be prominent in 6th Parliament of the Fourth Republic.