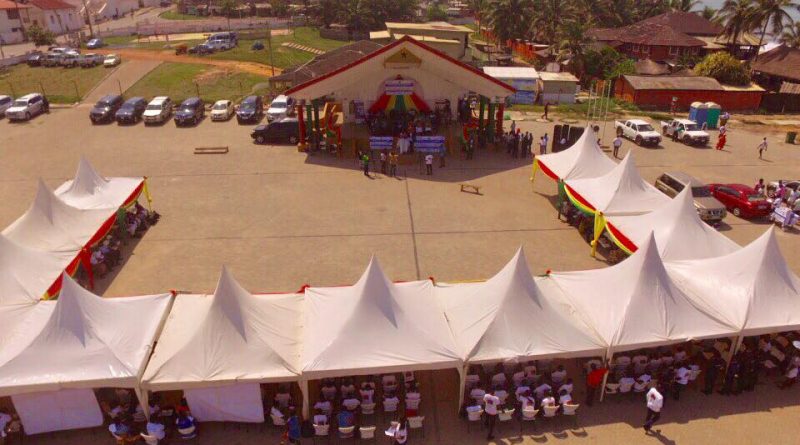 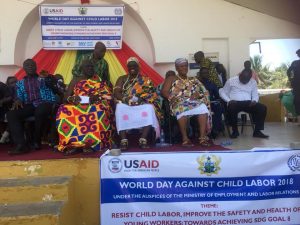 The event which is held annually on a global level is aimed at sensitizing the global public against the negative effects of child trafficking and the resultant child labor.

Stakeholders and individuals were admonished to keep faith in the people and government of Ghana to implement the National Plan of Action against Child Labor (II) by the Hon. Minister of Labor and Employment Relations,
Mr. Baffour-Awuah who advocated for an integrated approach to combating Child Labor, and eventually eliminate the canker by 2025. 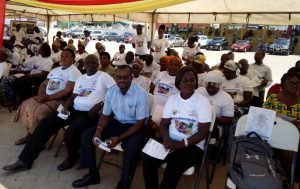 The Hon. Deputy Minister for Central Regional, Mr. Thomas Agyei-Baffour touted the SDG 8 as requiring the stop of Child Labor and Ghana cannot be left behind on this global effort.
“Child labor does not exist in only cocoa growing or fishing areas, but also in many disguised forms in all areas in society.
I’m not in any way dissuading parents from training their children but whatever is done, should be within the ambit of the law, and in the best interest of the child” the Deputy Minister concluded.

The national theme for the commemoration was Resist Child Labor, Improve the Safety and Health of Young Workers towards Achieving SDG. 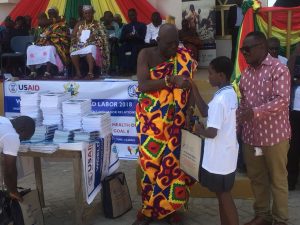 The Ghana NGOs Coalition on the Rights of the Child commented that the policies for working to combat child labor should not be left to gather dust on shelves.
Government agencies should be resourced and stop depending on NGOs and development partners for implementation of programs.
All aspects of child labor should have interest group to address child sex trafficking and exploitation which appears to be suffering neglect by stakeholders.

The representative of USAID-Ghana Mr. James Lyckus (of the Economic Growth Office of the US Embassy in Ghana) said the commemoration of the day is important to draw awareness on the child labor situation in Ghana.
– Children should help their parents but not be exploited.
– Parents should recognize the fact that when children to harzadous work, they are robbed of their present and future.
– Stakeholders and leaders should step up some more on the pedal in the effort to help combat child labor.
Mr. Lyckus cited the US Government’s work with allied stakeholders in strengthening the capacity of enforcement agencies, community and district stakeholders (precisely Community/District Advocates and Committees) in their activities. 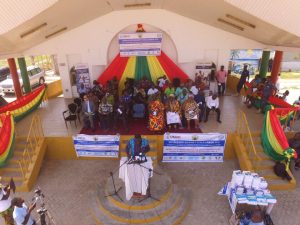 Mr. Ignatius Baffour-Awuah acknowledged the effort of the NGO and donor communities in combating child labor.
He however lamented the issue of instances of abuses of both in-school and out-of school children.
He asked for the modification of the message – to emphasize on the safety and welfare of children in work as part of training and positive upbringing.

In his closing remarks, the Paramount Chief of Oguaa Traditional Area (Cape-Coast), Osabarima Kwesi Atta II who chaired the program said children should be in school and training so they will become useful to themselves, families, communities, and the nation at large.
He admonished the gathering to go and teach and propagate the word that “Child Labor and Trafficking (CLaT) is bad and inhumane.
Those days of slavery must be truly confined to history”, Osabarima concluded.

Opportunities;
The presence of stakeholders at the event (on the dais among other service commanders), traditional leaders, Ministers of state, the NGO and donor communities is a good statement reiterating the fact that the agencies are ever-ready to live up to their mandate in combating child labor and human trafficking.
The Information, Education and Communication (IEC) materials from GIS displayed at the event exhibition stand made a good impression on the public and stakeholders requested for some from the collaborating NGO Friends of the Nation (FoN).
FoN officers at the event reciprocated GIS and the Police Anti Human Trafficking unit (AHTU) presence and expressed their intentions to continue the relationship with it in public education against humanity trafficking. 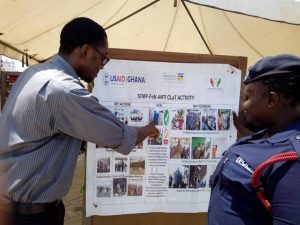 Conclusion;
Participation in the program was good and painted a healthy picture in the public’s eye on the work of the GIS, the Police, DSW and others.
The agencies should continue such programs with NGOs and Civil Society especially since their skills at mobilizing all levels of stakeholders, communities and the grassroots will always be beneficial to government agencies, and the public.