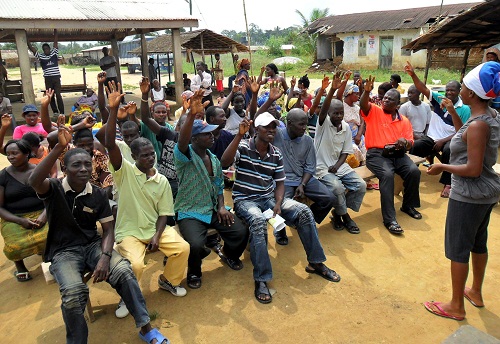 A key facet of poverty is social exclusion and a lack of participation in governance. The poor are either not aware that they have a right to participate or do not know how. At the local level, authorities including District Assemblies and Traditional rulers do not always see the value of citizen participation and even when they do, they are not sure how to go about it. Ultimately, citizen participation is fundamental, as a right in itself, but also in ensuring appropriate service delivery for poverty reduction.Ghana embarked on a decentralisation programme in 1988 as a key element in the process of democratisation and the search for a more participatory approach to development. The implementation of decentralisation programme has engendered some significant development results which have also impacted on national poverty levels. Consequently, Ghana has achieved a high level of poverty reduction; from 51.7% in 1991, 39.5% in 1999 and eventually to 28.5% in 2006. Poverty, however, continues to be high in certain regions, including the Western and three regions in Northern belt.

To contribute to addressing the gaps in citizens’ participation in local governance, Friends of the Nation collaborated with the Kumasi Institute of Technology, Energy and Environment and the Jomoro District Assembly to deepen citizens’ participation in local governance through Participatory Community Interactions; Public Hearings; Validation Workshop on the District Medium Term Development Plan (2010-2013). The Community Interactions were conducted in 20 communities to identify key community development challenges, available community resources, needs and aspirations and how to address these challenges through participatory processes. The output of this exercise was Community Development Plans to use a tool to influence decisions in the District Medium Term Development Plan (DMTDP) and also used to solicit for funds from other development partners or agencies.
Public Hearings on the DMTDP were done in all the ten Area Councils in the District to provide the platform for citizens to be sensitised on the content on the Plan and make their inputs. The Public Hearings also served as opportunities for citizens to know whether the content of the Plan reflect their needs and aspirations.
To authenticate the document and consequently adopt it, a two-day General Assembly meeting was organised to validate the DMTDP and adopt it.
The usefulness of the exercise is no in doubt, as it provided the opportunity for about 3,150 citizens to be abreast with the content of the DMTDP, as well as make their inputs. For the Jomoro District Assembly, the exercise contributed in fulfilling the requirements of preparing the DMTDP and challenging them to deliver better results. The District Planning Officer said, “This is the first time in my over twenty-year experience as a Local Government official that Public Hearings on the DMTDPs have been done”. “This exercise has really thrown a bigger challenge to us (District Assembly) as the communities now know what we plan to do for them and they will be very expectant”.
The exercise revealed some of the community development needs that were discussed during the consultative process in preparation of the DMTDP were not captured. For example, during the Elubo Area Council Public Hearing, the Assemblyman of Elubo-West Electoral Area remarked that, “had it not been this exercise, we wouldn’t have known that what we discussed with the Assembly officials as our critical felt needs are not what have been put in the Development Plan. We are going to be seen as liars by our community members. We are grateful to KITE and FoN for supporting the District Assembly to organise such a programme, without which we wouldn’t have known this”.