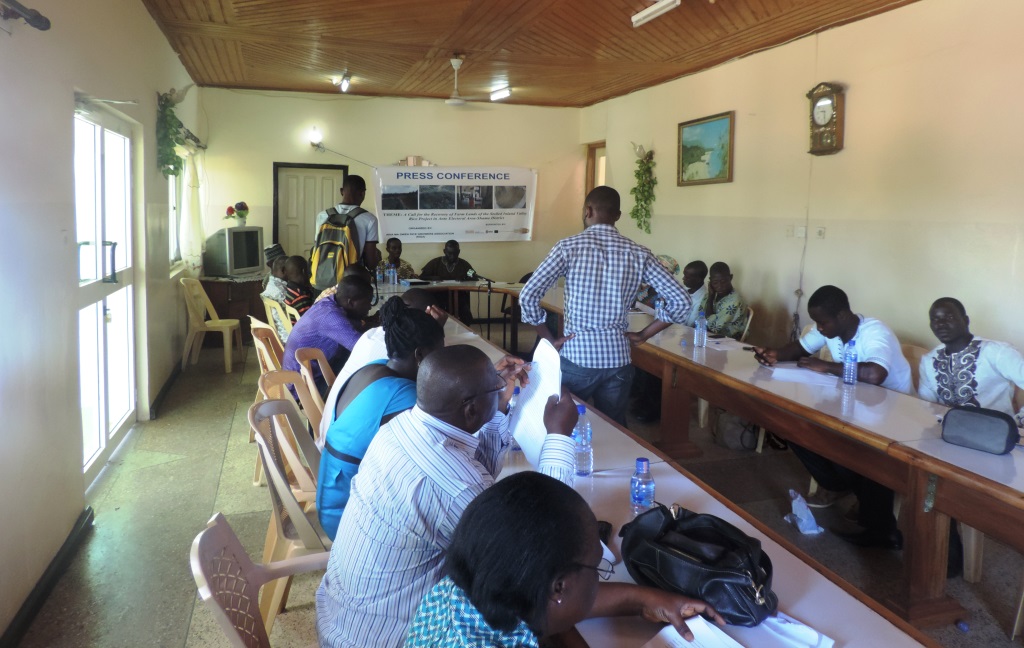 FoN supported the Ohiamadwene Rice Growers Association (RIGA) to organize a press conference on April 2, 2014 to press home their concerns through the media.

In 2009, the Ministry of Food and Agriculture (MoFA) commissioned the Inland Valley Rice Development Project (IVRDP) in Ohiamadwene. It was expected to be completed within 18 months. The main aim of the project was to enhance food security, reduce importation of rice, and increase incomes of smallholder rice producers, traders and processors through increased production of good quality rice locally.

As part of the project, food crops on about 75 hectares belonging to 350 smallholder farmers were destroyed without any of them receiving compensation. This was so as they were of the expectation that they will participate in the IVRDP. It is over 5 years now since the project took off; farmers cannot use their farmland any longer because the fertile top soil has been removed. These farmers are now faced with serious hardship. Their standard of living has reduced drastically especially with the female farmers. Most of them are single parents and now engaged in diverse small and less paid businesses at the Beposo market. Sadly, some have turned into head porters, sachet water and tiger-nut sellers which not productive economically.

It is against this background that Friends of the Nation facilitated the Ohiamadwene Rice Farmers Association to secure Business Sector Advocacy Challenge (BUSAC) Fund in advocating for the recovery of farm lands.

There has been a series of dialogue meetings between the association, MoFA and the Shama District Assembly but no good news has yet to result from these institutions. They always promise to get in touch with the contractor for the completion of the project. Based on this, the association with assistance from FoN organized a press conference on April 2, 2014 to press home their concerns through the media.

In their press statement, the association demanded for full compensation of the food crops destroyed and reclamation of the destroyed land.