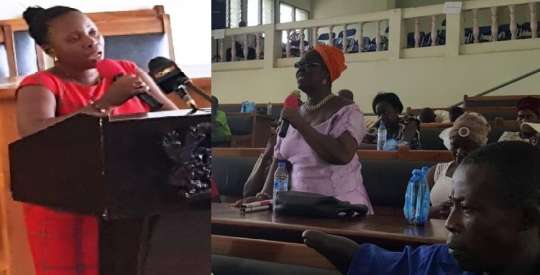 Friends of the Nation (FoN) a Non-Governmental Organisation (NGO) has organised a town hall meeting for Persons With Disabilities (PWD’s) and market women in the Tarkwa-Nsuaem Municipality.

The meeting, which is the first of its kind was held separately for the two groups at the assembly hall.

In a welcoming address, Ms Nana Efua Ewur, the Monitoring and Evaluation Coordinator for FoN said members of the groups were given the opportunity to present some challenges they were facing to the authorities of the Tarkwa-Nsuaem Municipal Assembly.

Ms Ewur said the aim was to address challenges faced by PWD’s and market women in the municipality.

She mentioned sanitation and waste management in Nsuaem, Simpa and Tarkwa markets, transparency and accountability in revenue collection and allocation, improvement of market sheds and infrastructure, mechanism for implementing market day in Tarkwa and expansion of Simpa market as some of the issues raised by the market women.

She pleaded with the assembly to implement strategic measures to improve the welfare of PWDs and also boost trading activities in Nsueam, Simpa and Tarkwa markets.

Ms Ewur entreated PWD’s and market women to take advantage of such meetings to know the number of projects initiated by the assembly.

The Municipal Chief Executive (MCE), for Tarkwa-Nsuaem, Mr Glibert Kennedy Asmah, mentioned some developmental projects put in place by the assembly for PWD’s and market women.

The MCE, who chaired the function, commended FoN for the meeting, adding that, the assembly would find permanent solutions to all the issues raised by the groups.

The Municipal Coordinating Director for Tarkwa-Nsuaem, Mr Isaac Kwakye called on the market women to keep the market place clean to help increase their sales.