FoN Celebrates Edina Bronya 2019 with the People of Elmina 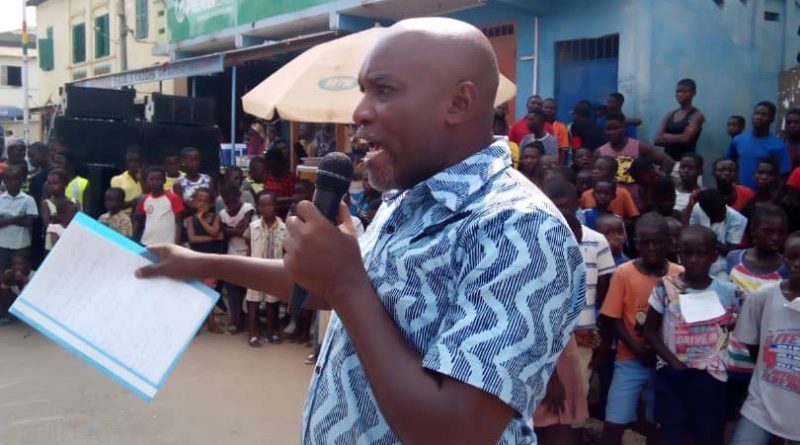 Friends of the Nation (FoN) and two sister organizations within the Ghanaian anti-Child Labor and Trafficking network teamed up with the people of Elmina in the Central Region to sensitize children in the community and surrounding areas on Child Labor and Trafficking (CLaT) and sustainable fisheries management issues and also to educate “the young” on development issues affecting the area.
Kwesi Johnson (Anti-CLaT Advocacy Officer from FoN) advised the teeming crowd of children and a motley representation of parents to sacrifice to enroll and keep their children in school instead of leaving them to fend for themselves at a very vulnerable age, or even giving them to others (trafficked) to other areas of the country and neighboring states to engage in hazardous fishing activities – which is illegal in the first place (apart from social, moral and economic implications). 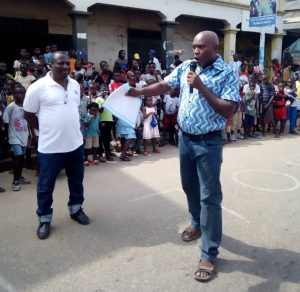 Kwesi Johnson(right) together with Mr Smith (left) from CEWEFIA, addressing the gathering.

He admonished the gathering to desist from taking persons under 18 years of age (children by law) on fishing expeditions since it is very unsafe for the young, and against the law. Children could however help with fishing related chores like mending of nets, fetching of water, carrying of light weight loads when school is not in session (e.g. holidays, weekends, and when school assignments has been completed). He also advised against children selling on the beaches especially in the night as this exposes them to sexual exploitation by unscrupulous persons.
The other non-governmental-organizations that took part were Central and Western Fishmongers Improvement Association (CEWEFIA – invited by FoN) who in turn came along with International Needs (IN); and also the Ghana Education Service (GES).
About Edina Bronya
This festival is a novel Christmas introduced to the people of Elmina during the Dutch era of the colonial period. On the eve of the festival, the Paramount chief climbs up Fort St. Jago and fires shots at midnight to usher in the New Year. This festival came to be known as “Edina Bronya” which translates as “Elmina Christmas”.
Historically, the celebration of “Edina Bronya” coincided with a Dutch Festival which falls on the first Thursday of January of every year and signified the bond of friendship between the Dutch and the people of Elmina. The climax of the festival is when the paramount Chief and his elders converge in front of Elmina Castle and a sheep is slaughtered.
The festival ends with merry-making , drumming and dancing throughout the night. This year’s celebration was held on Thursday, January 3, 2019.