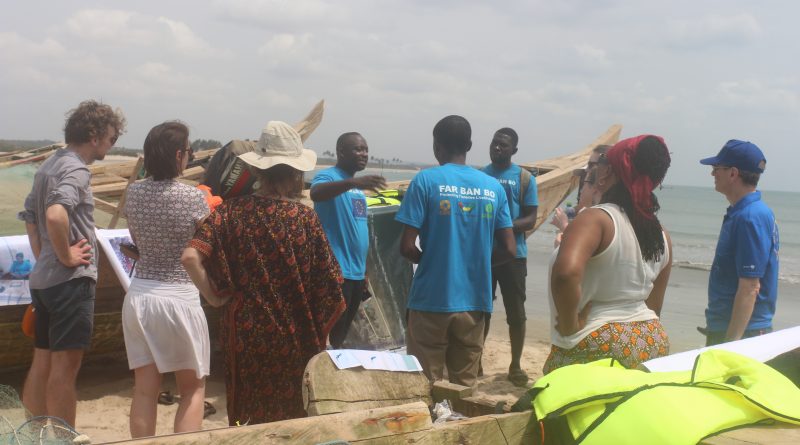 Fishermen in the Central Region have condemned the illegal activities of foreign trawlers in Ghana’s marine waters and has called on government to halt it.

“Government with all the security apparatus must strengthen ties with the local fishermen to fight Illegal, Unreported and Unregulated (IUU) fishing because it is affecting our livelihoods”.

They made the call when 24 representatives from the European Union (EU) Council Africa Working Party interacted with them at Gomoa Fetteh, as part of their visit to Ghana to ascertain the progress of two EU funded fisheries projects in the country.

They are aimed at securing and protecting fisheries industry through combating illegal fishing and strengthening capacities to support fisheries co-management for sustainable livelyhoods.

“The Chief Fisherman of Gomoa Fetteh, Nana Obrenu Dabum III, speaking on behalf of the fishermen expressed disappointment that despite the extensive policies and regulatory framework governing fisheries, including the Fishing Act of 2002, (Act 625), Fisheries Regulation of 2010 (LI1968), which abhor illegal fishing, the practices persisted within almost all the coastal regions, with foreigners highly engaged in it.

He mentioned some of the IUU practices as “Saiko” fishing mainly done by foreign vessels, mostly Chinese and some other foreign nationals, light fishing and the use of dynamite and other detergents to attract fishes by local communities.

Nana Dabum said the dwindling fish stock being witnessed was mainly because fishermen continued to engage in illegal fishing practices in the fishing communities, adding that, there would be no need for a close season if the practice was halted.

“We want government to be bold and firm to stop foreign vessels and also communities engaged in IUU practices by focusing attention and resource to end it once and for all”.

“The fishermen at Gomao Fetteh had stopped the IUU and do not allow colleagues to engage in it and also fishmongers do not buy fish that is landed at the beach, if the fishermen had used illegal methods and urged all fishing communities to do same.”

Mr Paolo Salvia, Deputy Head of the EU Delegation noted that, problems of the fisheries sector was trans-national and called on all stakeholders, both local and international to play their respective roles to help address the challenges.

He expressed satisfaction about the implementation of the two projects and said the EU was committed in enforcing stronger partnership with Ghana and ensuring sustainable improvements and social equity in Ghana’s fisheries sector.

Mrs Philothea Osei- Bonsu, Gomoa East District Zonal Fisheries Officer lauded the two projects and said it would go a long way to improve transparency and accountability in the fisheries sector and contribute to efforts in ending IUU practices.

She said her office would continue to support all efforts aimed at protecting, sustaining and contributing to the re-building of the fish stock because the sea was an important resource to the economy of the country.