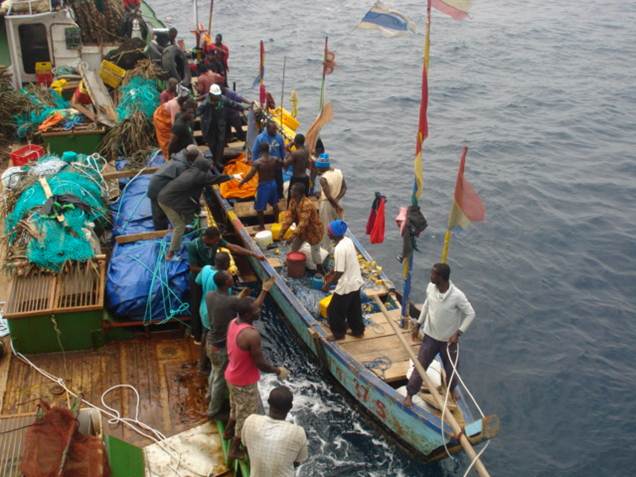 Among Ghana’s innumerable natural resources, the Atlantic Ocean contends as one of the most important with its accompanying potentials including a thriving fishing industry. Over the years Ghana’s fishing industry had been a source of livelihood and employment for over two million people or 10% of the total population.
The industry accounts for about 5% of the agricultural Gross Domestic Product (GDP), and 10% of the country’s animal protein requirements. Ghanaians consume 850,000 metric tons of fish per annum making them one of the highest consumers of fish in the world. Approximately, just about 45% of the fish consumed is produced locally as a result of a myriad of challenges both from government and fishermen which is threatening to entirely disintegrate the industry.
The Western Region of Ghana which accounts for over 300,000 of tones of the country’s fish for years clamored for a fishing harbor but in vain till the Albert Bosumtwi-Sam Fishing Harbour in Sekondi was constructed in the mid-90s. There had been many reports where fishing inputs including subsidized premix fuel meant for fishermen were diverted. The plight of Ghanaian fishermen, mostly artisanal had been worsened by the practice of pair-trawling by highly sophisticated, industrialized fishing vessels who had in the last decade drastically depleted Ghana’s marine fish stocks while government seemingly looks on helplessly.
Fishermen nationwide have been reporting of low harvests and in some cases no harvest due to the depletion of fisheries resources. This has worsened the poverty situation in coastal fishing communities which are ranked among the poorest in the country.
Consequently, in a desperate act to survive, local fishermen had also resorted to the use of bad fishing methods which include fishing application of dangerous chemicals like the banned DDT and dynamite; and also light fishing. Fishermen are also using small-mesh sizes which harvest juvenile fish whilst at the same time resorting to extracting mangroves for use as firewood. Mangroves serve as spawning grounds for many fish species. These last two practices contribute to many species of fish going extinct.
With enforcement of fisheries regulations facing serious challenges because of inadequate human and material resources on the part the navy, the police and the judiciary, the governance aspect of fisheries has become daunting. Voluntary compliance by the local fishermen is also not forthcoming because they see the big trawlers breaking the law with impunity and virtually going scot free all the time. Fishermen say “if they stop their bad practices, we shall also stop”. Meanwhile the law will deal with whoever is apprehended irrespective of whatever justification one has for indulging in illegality.
This scenario and high cost of fishing inputs has translated into price hikes of fish and its related products on the market. Generally, this has deepened the poverty level of fisher folks and their dependants, resulting in very high school dropouts, child prostitution and teenage pregnancy in the fishing communities. In Shama district for example, whilst Ghana’s population growth rate is put at 2.2% per annum, that of the district is recorded at 3.5% per annum. Most of these births are by unmarried teenage and young mothers who trade sex for fish because of poverty. Substance abuse and alcoholism and use of stimulants abound in many other coastal fishing communities.
Although the future of the country’s artisanal fishing industry looks bleak, there is a ray of hope as as civil society and few individuals in state institutions that are strategically placed and market players have formed alliances and collaborating to address the situation and reverse the process in the Western Region. One example is the Hen Mpoano (Our Coast) Initiative led by the Coastal Resources Centre of University of Rhode Island (CRC-URI) supported by USAID. Another is the ‘Mwananchi Program’ in collaboration with Participatory Development Associates (PDA) under the project Improved Decentralized Fisheries Pilot project. This is supported by the Overseas Development Institute and funded by UK Aid. FoN carries out and series of advocacy programmes and training workshops with all local stakeholders including the media on the need to ensure best practices in fishing and environmental protection. Local government authorities, government agencies and policymakers and the communities were brought on board. Broadly, these include District Assemblies, Fisheries Commission of the Ministry of Agriculture, the Environmental Protection Agency, the Navy, and the Police.
Programs have been put in place and implemented with a view to ensuring that Ghana’s coastal and marine ecosystem were sustained to provide goods and services which would generate a long term socio-economic benefits.