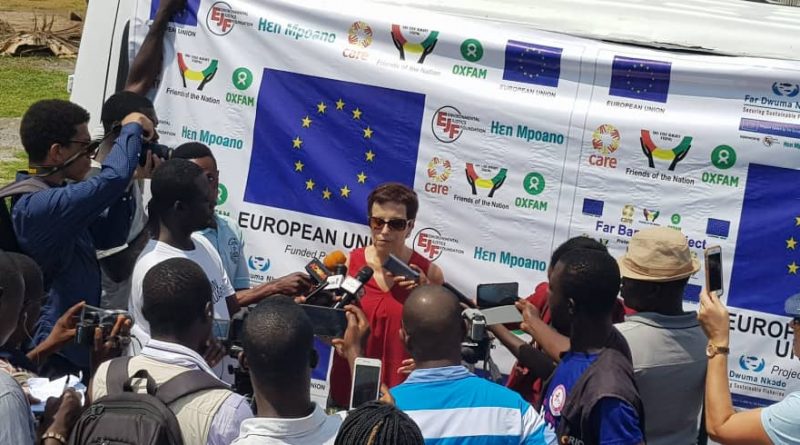 The European Union ( EU) has urged the Government to put in place robust and transparent measures to end the menace of illegal transshipment at sea known as ” Saiko”.

The intervention, it said had become ideal to end the highly damaging practice and other forms of illegal fishing as it was fast depleting Ghana’s marine resources and threatening human existence.

Madam Diana Acconcia, the Ambassador European Union (EU) delegation to Ghana gave the advice at a durbar held in her honour when she paid a working visit to the ‘Far Dwuma Nkodo’ and Far Ban Bo’ projects being funded by the EU.

“There is much to be done, if we are to safeguard the ecological gains from the closed season. IUU fishing is rife across all fishing sectors from the industrial through to the inshore and artisanal fleets. If we are to save Ghana’s Fisheries, all fishers need to abandon their unsustainable and illegal practices and adopt a more responsible path forward”, she said.

The EU Ambassador commended the Fisheries Commission and the Fisheries Enforcement Unit for having the courage to impose one million dollars on a trawler vessel that had juvenile small pelagic on board during the May-June Closed season.

Such robust and transparent actions, she said would deter other operators from engaging destructive forms of IUU fishing that undermined the good interventions of management measures including; the closed season.

She assured the Ghanaian Government and fishing communities of the EU’s support in the fight to end the highly damaging practice of “Saiko” and other forms of illegal fishing”, saying “it is clear that urgent action is required to save Ghana’s coastal fisheries”.

She said the EU remained resolute in supporting and promoting sustainable and regulated economic activities through improved ocean governance and the development of the blue economy.

The EU ambassador noted with regret that fishery resources in West Africa were under increasing pressure with growing evidence of IUU fishing being a component of an organised cross border crime, money laundering among others.

She lamented that despite the vital role of the fisheries sector in Ghana’s food security and economic development, the average income per canoe continued to drop and the country is forced to import more than half of its fishes consumed.

Madam Acconcia encouraged Ghanaian fishers to protect the marine resources and to improve the conditions for sustainable and regulated economic activities because the collapse of coastal fisheries would have unimaginable implications for fishing communities with potential for widespread poverty, civil unrest and threats to national security.

Mr Socrates Segbor, the Fisheries Programme Manager of the “ Far Dwuma Nkodo” project said the project was aimed at securing greater environmental sustainability and social equity in Ghana’s fisheries sector. He said the project supported efforts to reduce illegal fishing and built capacity of fishing communities in the sustainable management of their resources through advocacy, community consultations and training.

Mr Segbor mentioned “saiko” as  one of the destructive illegal fishing practices that hampered the development of the fisheries sector, indicating that the enormous quantity of dish traded illegally through Saiko made sustainable fisheries management impossible. He emphasised that eradicating “Saiko” would enhance food security and safeguard jobs , stimulate the economy and boost the well-being of the nation.

Mr Kyei Yamoah, Programmes Manager of Friends of the Nation (FoN), an implementing partner of the “Far Ban Bo” project encouraged the fisher-folks to adhere to the laws governing fisheries, desist from engaging in illegal fishing activities and practise responsible fishing to safeguard the fisheries resource for posterity.

Osabarima Kwesi Atta II, Omanhen of Oguaa Traditional Area called for collective efforts to protect the fisheries sector from collapse and implored the government to take the issue of “Saiko” seriously and ensure that the practice was halted on the Ghanaian waters.