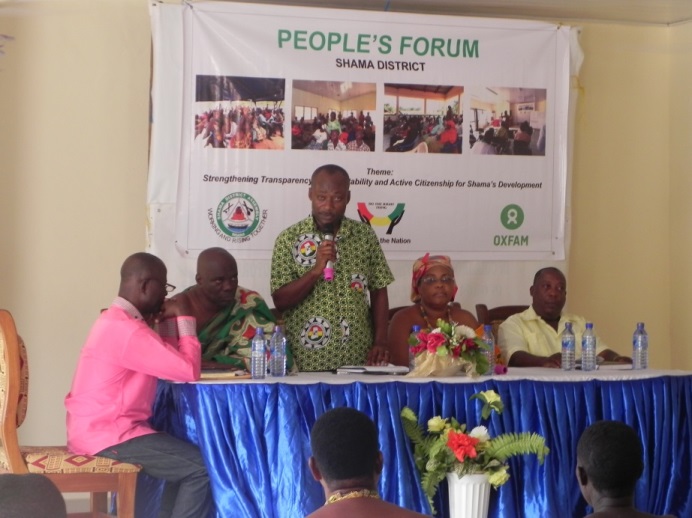 There is growing recognition both among governments, donors and civil society that citizens and communities have an important role to play with regard to enhancing accountability of public officials, reducing corruption and leakage of funds and improving public service delivery. As a result, Social Accountability has become an attractive approach to both the public sector and civil society for improving governance processes, service delivery outcomes, and resource allocation decisions. Over the last few years in Ghana, numerous examples have emerged that demonstrate how citizens can make their voice heard and effectively engage in making the public sector more responsive and accountable. For example, in 2014, Friends of the Nation (FoN) supported the Shama and Jomoro Districts to prepare participatory Medium-Term Development Plans. Over 6000 residents from 100 communities were directly consulted to provide their prioritised development needs as inputs. 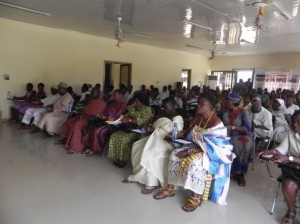 To promote and sustain social accountability and active citizenship by facilitating the platform for citizens to engage with local governments on how their taxes are used, Friends of the Nation with support from OXFAM organized People’s Forums in Shama and Jomoro Districts. The two Districts are part of the frontline oil & gas coastal Local Government areas in the Western region where expectations are high in translating petroleum wealth into rapid social and economic development.

The People’s Forum therefore provided the platform for the citizenry to be informed on the State of Development in the Districts and the extent of implementation of the Districts’ Medium-Term Development Plans. 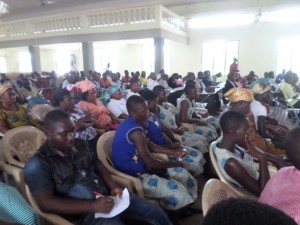 The forums were attended by over 300 residents in both Districts. Participants at the Forum included traditional authorities, organized groups of women, people with disabilities, community-based organizations, youth groups, students, trade associations, fisher folks and grassroots activists of political parties. It is noteworthy that the Forum in Shama was broadcasted live to over 10,000 people on Radio Shama 92.9 FM with some residents calling in to make their voices heard.

The forums were addressed by the District Chief Executives (DCE) who provided overview of the stateof District in terms education, health security, energy, land use, tourism, water & sanitation, fisheries and coastal resources management. Details of the costs and status of projects, as well as the revenue performance of the Assemblies in terms of District Assembly Common Fund (DACF) and Internally Generated Fund (IGF), were also provided.

During the open forum, many residents queried the Assemblies on abandoned projects commenced by previous administrations, justification of some project costs, poor performance of basic education, poor state of facilities and infrastructure in markets, poor road networks among others. 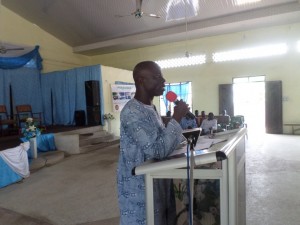 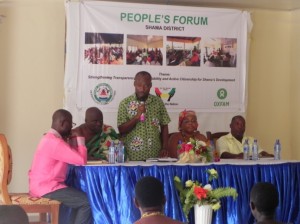 The Assemblies responded by citing the untimely release of the DACF from Central Government, low IGF receipts due to unwillingness of  many residents to pay their taxes, poor communal spirit among the citizenry to contribute to development projects as some of the contributing factors for their inability to meet citizens’ expectations.

A trader shares her perspective on the Forum in Shama

Vivian Araba Gyasi is a trader and member of the Shama Junction Market Women Association. Vivian was one of the many residents and tax payers that participated in the People’s Forum in Shama. Other residents who could not attend the Forum listened to the program live on Radio Shama 92.9 FM and had opportunity to call-in to express their concerns.

Vivian was informed on how the Assembly is using her taxes to facilitate development projects in the District. She had the opportunity to express her concerns by demanding better infrastructure and facilities to boost trading activities in the Shama Junction market.

She expressed her delight for attending the Forum and mentioned it provided the platform to strengthen transparency, accountability and active citizenship for Shama’s development. 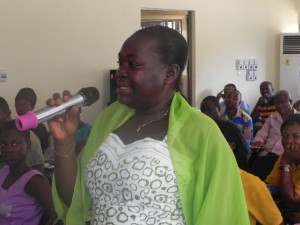 “I am happy that our association, as well as other associations and opinion leaders were invited to participate in this forum. I have been enlightened on how the Assembly is using my taxes to enhance socio-economic development in the district. The forum was indeed represented by the ordinary people in the district and not only community leaders. We were given the opportunity to ask questions and I believe the comments that we made will be considered by the Assembly to fast-track the development of the district. I expect the District to honor its promise to provide the necessary infrastructure and facilities in the Shama Junction market to boost trading activities”.

“I will encourage the Assembly, Friends of the Nation and OXFAM to continue to provide platforms like this because it strengthens transparency, accountability and active citizenship. I look forward to attend the next forum.”