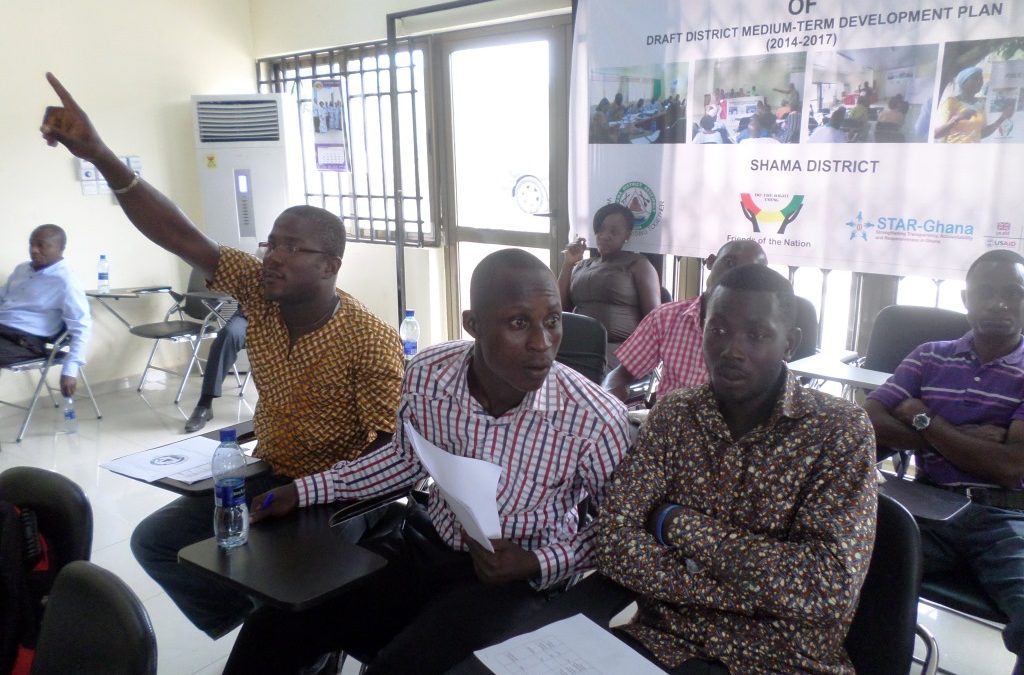 The Shama District Assembly held a forum to validate its District Medium Term Development Plan (DMTDP, 2014-2017). With the support of STAR-Ghana (Strengthening Transparency, Accountability and Responsiveness in Ghana), the Assembly collaborated with Friends of the Nation (FoN) to organize the event. In the past months, FoN had supported the Assemblies of Shama and Jomoro District in undertaking Community Needs Assessments followed by Public hearings to identify the development challenges of the citizenry in all the Area Councils of the District. The validation forum therefore provided the platform for the citizenry and all stakeholders to make their final inputs into the Plan before it is adopted by the the General Assembly of the District. The forum in Shama consisted of presentations on the draft Plan, the contribution of Friends of the Nation in the plan preparation, and open discussions. The presentation of the draft Plan focused on the main problems, opportunities, constraints and challenges in the District, and the major programmes and activities to be implemented from 2014 to 2017.

Delivering the welcome address, the District Chief Executive of Shama, Hon. Enoch Kojo Appiah, stressed on the need to undertake participatory approaches in developing such plans. He indicated that the Development Plan really reflects the needs and aspirations of the people of Shama urging all stakeholders to support the Assembly to ensure the successful implementation of the Plan.

According to Assistant Planning Officer of the Assembly, Jeffery Scott, over 1,500 people from about 34 communities were directly engaged in the process of developing the plan through various platforms. He noted that all relevant stakeholders were consulted during the Plan’s preparation. Those include traditional leaders, private sector players, farmers’ and fishermen’s groups, women’s and youth groups, government agencies, Civil Society Organisations, Persons with Disabilities, and Gender-based Organisations, among others. He stated that with the support of Friends of the Nation, the Assembly was able to incorporate various projects and programmes to address coastal resources management and climate change vulnerability issues.

A Deputy Director at the National Planning Development Commission (NDPC), Jonathan Azazoo, commended the Assembly for abiding by the guidelines issued by the Commission for the preparation of the District Medium Term Development Plans. He expressed that the processes engaged by the Assembly in preparing the Plan serve as a model for other Metropolitan, Municipal and District Assemblies (MMDAs) to emulate in ensuring participatory and accountable governance. Mr. Azasoo therefore called for active citizenship to ensure effective implementation of the Plan through participatory monitoring and evaluation. He also appealed to the Assembly to diversify its revenue sources to ensure the availability of enough resources to implement the Plan. “The Assembly can execute these proposed projects and programmes only when there are sufficient resources, otherwise they only look good on paper,” he said.

The collaboration with the Assembly forms part of the “Bridging the gaps in Local Governance” project funded by STAR-Ghana. Solomon Kusi Ampofo, Programme Officer at Friends of the Nation, said, evidenced by the increased number of citizens and stakeholders engaged in preparing the Plan, the objectives of the project have been achieved. FoN will assist the Assembly to print 200 copies of the Plan and disseminate them to all relevant stakeholders. He added that the organization will also support the implementation of the Plan by facilitating awareness creation on eco-system specific vulnerability assessments and adaptation plans, as well as assist in preparation of local plans for selected communities to generate additional understanding and appropriate responses to the impacts of erosion, flooding and wetlands degradation.

The District Assembly will present the finalized document to its General Assembly for adoption and subsequently submit it to the National Planning Development Commission.