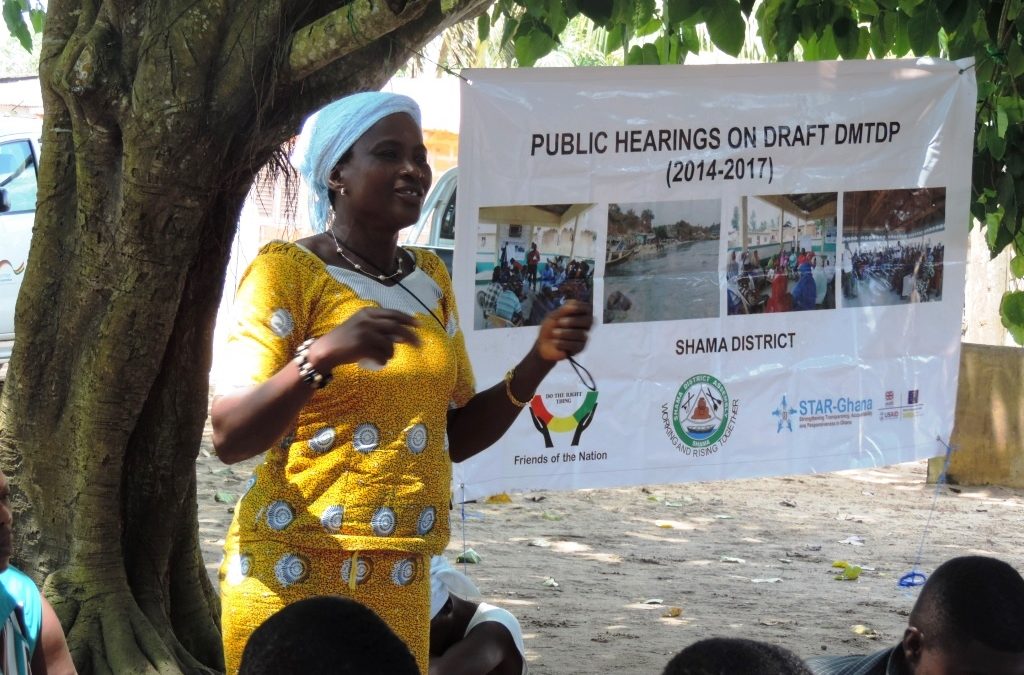 Unmet expectations of grassroots lead to apathy in development and democratic initiatives in communities. This unfortunate trend creates a challenge in governance of the country as a whole as communities form the building blocks of our much touted democratic credentials as a nation. This came to light during Communities Needs Assessment, and subsequent Public Hearing exercises conducted in the Shama District Assembly (SDA) and Jomoro District Assembly (JDA) in the Western Region of Ghana respectively.

Friends of the Nation (FoN) with support from the Strengthening Transparency Accountability and Responsiveness (STAR-Ghana) Project is collaborating with the two Assemblies to facilitate inclusion of grassroots’ voice in the District Medium-Term Development Plans (DMTDPs). The title of the project involving the two Local Government Areas is “Bridging Gaps in Local Governance”.

The support provided to the Assemblies so far revealed key lessons: the Assemblies are inadequately equipped when it comes to financial and human resources which prevents them from carrying out their mandate punctually. Also, the grassroots’ over-expectation of government intervention leads to apathy because these are year-in year-out unmet. The Assemblies are not able to meet with the communities to discuss what the issues therein are and prioritize them for action, let alone conduct the follow-up Public Hearings. Those are necessary so that the communities can append their consent to their needs that have been identified at the needs assessment meetings and then put into technical statements for their benefit. It has regularly been the practice therefore to work from the desk at the office and compile “relevant” information for inclusion into the DMTDPs rather than engage with the communities.

With guidelines from the National Development Planning Commission (NDPC) in Accra, Local Government Assemblies throughout Ghana are expected to complete draft Medium-Term Development Plan for the next four years (termed MDTP 2014-2017). And still, almost at the end of 2014, Assemblies struggle with financial issues because the District Assemblies’ Common Fund is yet to be released. It is in this framework that the two Assemblies are receiving assistance for the intervention. The project is supported by STAR-Ghana and implemented by Friends of the Nation.

Throughout communities in both Shama and Jomoro Districts, some issues repeatedly came up, such as inadequate access to Water Sanitation and Hygiene (WASH) services, therefore underscoring the recent outbreak of cholera and public outcry against open defecation in the country. Others were poor services in the education and health sectors for grassroot people. Poor or inadequate infrastructure in the educational, and services in the health sectors were critically cited.

Poor road networks (no drains, eroded streets and broken down infrastructure like culverts) within food producing communities, and those interconnecting with urban areas were mentioned as challenges to efforts to livelihoods and food security.

The issues of climate change, coastal flooding and dwindling fish catches in the coastal areas came up strongly in the coastal fishing areas. These are what are termed Integrated Coastal Management (ICM) issues with the communities acknowledging their own contributions to the problems. In the coastal communities, “fishing is everything” and the youth and women who are the backbone, are the most sidelined and angriest. These are special groups that must be paid critical attention to for programmes to bear fruits. Interestingly, in the coastal communities of Aboadze, Abuesi, Anlo Beach and Shama, the people were more interested in going ahead with their fishing activities than sitting down for Public Hearings though they had been adequately notified by the Assembly.

Inadequate contact with local government officials, and also elected and appointed office holders came up as critical issues. “After elections, we don’t hear from them again till another one is around the corner. When the issues are factored into the MTDP, then they are likely to be paid adequate attention by the authorities and also be held accountable…” was how one community female leader in Jomoro summarized her frustrations. Such programs like this one by Friends of the Nation and STAR-Ghana are therefore very useful as they provide communities the platform to get their voice into governance structures regularly.