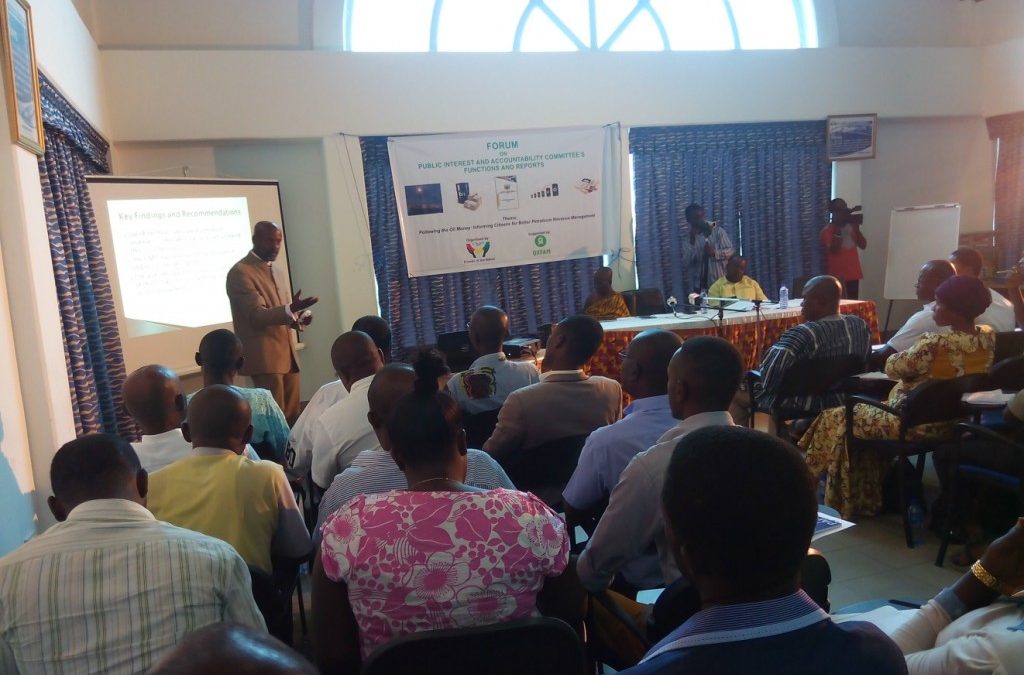 Towards realising greater transparency, accountability and citizens’ oversight in management of Ghana’s petroleum revenues, the Public Interest and Accountability Committee (PIAC) was established under Section 51 of the Petroleum Revenue Management Act, 2011, Act 815 with the following objectives provided in Section 52:

The Committee is required, under the same law, to issue a report every six months to keep track of how petroleum revenues received during such period are being used and accounted for by government and various state agencies which have responsibilities to manage the resource.

Since its inauguration in September 2011, PIAC has produced five reports which contain findings and recommendations relating to management of petroleum revenues. The reports are very comprehensive and comprehensible which cover a broad range of issues associated with petroleum revenue management such as information on production; liftings; total revenues accruing; allocation and utilisation of these revenues by government and the management of the funds set aside in the Ghana Petroleum Funds (Ghana Stabilisation Fund and the Ghana Heritage Fund). PIAC’s reports serve as a credible reference for researchers, academia, civil society organisations, government agencies and the general citizenry to be informed on petroleum revenue management.

To deepen citizens’ engagement and advocacy on the PIAC reports, Friends of the Nation with support from OXFAM facilitated a Forum on the Committee’s functions and reports on January 27, 2015, in Takoradi. The Forum which was under the theme “Following the Oil Money: Informing Citizens for Better Petroleum Revenue Management” provided the platform for over 80 citizens and stakeholders in the Western Region to discuss the findings and recommendations of PIAC’s reports from 2011-2013.

Specially, the forum objectives were to:

Presentations on Ghana’s Petroleum Revenue Management Framework and PIAC’s reports from 2011 and 2013 were delivered by experts from FoN and PIAC respectively.

Many stakeholders expressed worry over the thin distribution of petroleum revenues on many projects thereby minimising its impacts. For example between 2011 and 2013, GH¢544.92million has been spent on constructing, rehabilitating, upgrading, resurfacing a total 118 roads and road related ancillary works (such as repairs to bridges, other structures and drainage works). All the road projects were started prior to the discovery of oil and virtually all are yet to be completed. Other concerns were the uneven distribution of petroleum revenues across the ten regions of Ghana. While the Ashanti, Eastern and Western Regions respectively received 18%, 17% and 12% of Annual Budget Funding Amount funded projects from 2011-2013 , the Northern, Upper East and Upper West received 5%, 5% and 1% correspondingly.

The following recommendations were also made:

The forum contributed to increased public knowledge and discourse on the Committee’s report. Many media houses such as the Ghana News Agency, New Times Corporation, CITI FM, Business Television Africa (BTA) and Viasat 1 reported and did follow-up stories on the issues discussed at the Forum.

Another output was the request the Western Region House of Chiefs for further engagement on the Committee’s reports to provide the opportunity for many of its members to be informed and join the advocacy the efficient management of petroleum revenues. FoN is working with the House to organise another Forum in March.