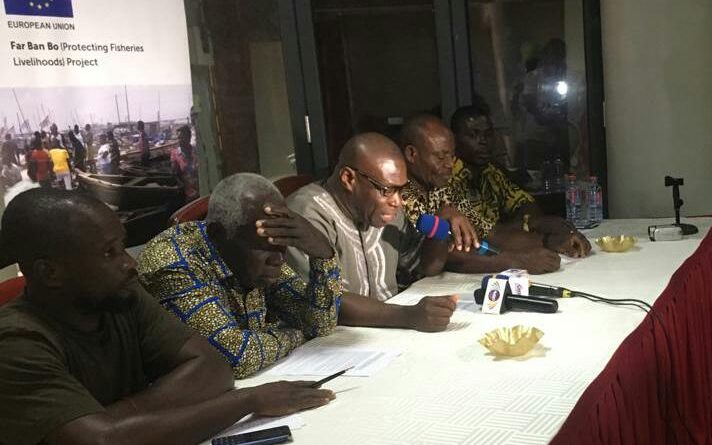 They have therefore called on the government to double its efforts to end the practice to save the marine resource from further depletion.These were contained in a communiqué issued at the end of a two-day fisheries strategic meeting and training for fishermen in the Western and Central Regions on “effective IUU monitoring and reporting”.

They included executives of the Ghana National Canoe Fishermen Council from the Western Region, Inshore Fishers, Canoe Owners and fishers from Dixcove and Anomabo, representatives from the Fisheries Commission, Marine Police, Fisheries Enforcement Unit and Civil Society groups.It noted with strong concern political interference in IUU cases as it hindered on deterrence and must be stopped by all concerned stakeholders.

“Fisher-folks should be supported to combat IUU by monitoring and capturing evidence, documenting and reporting to Fisheries Enforcement unit (FEU) and the Marine Police”, the communiqué said.It recommended for the inclusion of women groups in the fight against IUU to also monitor fish bought to ensure the reduction of IUU offenses.GNA

The fisher folks and the IUU monitoring committees have thus committed to ensure effective communication, education and sensitisation of communities about the role and responsibility of the IUU committee in the community. “Educate fishers on the negative impacts of illegal fishing to promote voluntary compliance”, it added.

It further noted that the collating and documentation of IUU cases by fishers were weak and stressed the need for fishermen to be supported with IUU monitoring and reporting.

The communiqué further called on the Government to establish Marine Police posts at strategic landing beaches along the coast and resource the Fisheries Enforcement Unit (FEU) for effective enforcement to promote deterrence and enforcement of fisheries laws. Additionally, they urged the Government to end illegal trans-shipment (Saiko) before the end of the trawler closed season by September this year.

Widespread Illegal Unreported and Unregulated(IUU) fishing has been a major challenge to the sustainability of Ghana’s fisheries. Against this background, the Far Ban Bo (FBB) project funded by the European Union catalyzed the formation of Community fisher folks IUU Community Monitoring Groups (IUU -CMG) as pilots in selected fishing communities. The purpose of the IUU -CMG is to monitor and report IUU infractions that occur in their fishing zones as a pilot approach to testing community fisheries watchdog role.

In line with this, the FBB organized a 2-day zonal training workshop for the Anomabo (Central) and Dixcove (Western) CMGs on effective IUU monitoring and recording. This training included electronic and manual recording in formats that conform with marine police and Fisheries Enforcement Unit (FEU) systems of IUU recordings. Resource persons for the training were drawn from MOFAD, Fisheries Commission, Fisheries Enforcement Unit, Marine Police, Navy, GNCFC and CSOs implementing fisheries Projects.

The training provided the platform for the stakeholders to discuss strategies on ensuring effective monitoring and reporting of IUU and to connect with Government officials around IUU and sustainable fisheries management issues in Ghana.