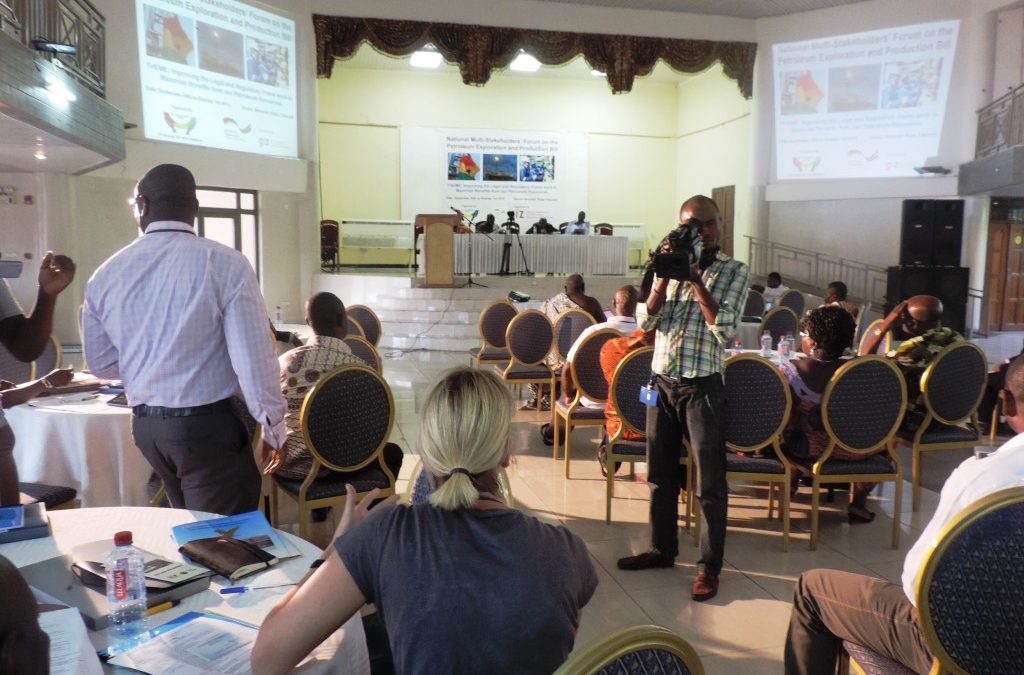 To contribute to deepening citizens’ understanding of governance and collate their views to strengthen the Petroleum Exploration and Production (E & P) Bill, 2014, Friends of the Nation (FoN) in collaboration with Deutsche Gesellschaft für Internationale Zusammenarbeit (German Development Cooperation, GIZ) organized a two-day Multi-stakeholder Forum in Takoradi on September 30 and October 1, 2014, under the theme “Improving the Legal and Regulatory Framework in Maximizing Benefits from our Petroleum Resources”. The forum had the objective to provide the platform for citizens and stakeholders in the Western Region to share their perspectives and make contributions in strengthening the Bill on the legal, governance, fiscal and environmental management provisions.

The Petroleum E&P Bill, 2014, seeks to replace the Petroleum (Exploration and Production) Law, PNDCL 84. The latter has become outdated considering the current dynamics and challenges of Ghana’s petroleum industry. The Bill has been approved by cabinet and it is yet to be laid before Parliament . It is in this time frame that Friends of the Nation, as a Civil Society Organization (CSO), in collaboration with GIZ, provided the platform to discuss and stimulate additional inputs to enrich the Bill.

Aside presentations given by various experts on the Bill, such as Africa Center for Energy Policy (ACEP), Center for Public Interest Law (CEPIL), Legal Resource Center (LRC) and FoN, panel discussions and open forum offered opportunities for stakeholders to give their input and raise important questions. Over 80 stakeholders actively participated in the forum. They consisted of representatives from Government (Office of the President, Ministry of Energy), Traditional Authorities (Western Regional House of Chiefs), District Assemblies as well as Marine Unit of the Ghana Police, Ghana Navy, Ghana Maritime Authority, Fisheries Commission, Environmental Provision Agency (EPA), Commission on Human Rights and Administrative Justice (CHRAJ), Civil Society and Community-Based Organisations, Ghana National Canoe Fishermen’s Council (GNCFC), Community Environmental Monitoring and Advocacy Group (CEMAG), oil and gas companies and the media. Opening remarks were given by Nana Kwesi Agyeman, Omanhene of the Lower Dixcove Traditional Area and Vice President of the Western Regional House of Chiefs, Donkris Mevuta, Executive Director of Friends of the Nation and Ulrich Hüser, Program Manager of Good Financial Governance Program (GFG) at GIZ, amongst others.

Co-chair for the opening ceremony, Nana Kobina Nketsia V, Paramount Chief of Essikado Traditional Area, entreated government to avoid any partisanship approach in the utilization of the country’s petroleum resources to ensure a holistic benefit for the entire citizenry. Expressing surprise that majority of the membership of the Petroleum Commission, which is supposed to be an independent body, to regulate activities of the petroleum sector, were appointed by the President. He concluded that although a number of legalisations and policies had been initiated by the government to govern the sector, there was the need to place national interest above any personal or partisan interests.

He further commented that any good legal framework generally seeks to ensure that the commercial interest of the major industry stakeholders is balanced with the larger interest of the citizenry, and set standards for environmental protection, livelihood and health safety of the communities hosting the petroleum production.

Another issue which was very critically discussed relative to the Bill was the widespread discretionary powers of the Minister responsible for Energy and Petroleum, which was felt to be too much disposed to making him/her have too much concentration of power. Confidentiality clauses in the Bill were mentioned as needing a review.

In terms of outputs, the forum was very successful as it contributed to enhancing stakeholders’ understanding of the Bill and provided the avenue for their views to be captured to strengthen the Bill. Participants demanded for more engagement on the Bill to ensure all relevant stakeholders’ views have been captured. In response to this, two additional forums supported by STAR-Ghana were held on the Bill targeting Civil Society Organisations and Trade Unions on the one hand and selected chiefs and queen mothers from the coastal Districts of the Western Region on the other hand.

After thorough discussions on the Bill through these forums, participants were of the view that the Bill is progressive in many ways and is a major improvement on the PNDC Law 84. It particularly covers new areas including licensing, improved fiscal terms including provisions on thin capitalization and transfer pricing, regulations on infrastructure installation and operations, Health, Safety, Environment and good governance. They however expressed that it falls short in the provisions relating to open contracting, thin capitalization, compensation principles, decommissioning, pollution damage, protection of fishing livelihoods and biodiversity and citizens’ engagement in opening a new area.

Participants in general made a number of suggestions which admonished drafters of the Bill to factor infusing a mandatory disclosure of oil contracts clause, and harmonize the regulatory functions and activities amongst stakeholder agencies.

The collated views will be used to engage Parliament when the Bill is laid before the house.